Skip to content
I took a trip out to San Diego’s Ocean Beach neighborhood this afternoon (16 Dec 2011). Sometimes I just like to hangout in parts of San Diego other than the neighborhood that I live in, which is Cortez Hill. My neighborhood is one of several that comprise downtown San Diego, which includes everything in the 92101 zip code. I like downtown SD because it is the most urban part of San Diego and it is very walkable. As a former New Yorker I appreciate that characteristic of downtown. However, I also find several other sections of San Diego intriguing because of their own unique character. Sometimes I go to the neighborhoods around Balboa Park, such as North Park or nearby Banker’s Hill. Other days I might go to one of the beachside parts of the city, such as La Jolla Village or Pacific Beach. I also enjoy going across San Diego bay to visit Coronado and Imperial Beach.

Ocean Beach is located on the western side of Point Loma and is, of course, situated next to the beach. The locals refer to Ocean Beach as OB and it is definitely the most bohemian of all of San Diego’s neighborhoods. OB is a very laid back place that has a variety of good little restaurants, bars and coffeehouses, which is always a draw for me. Today I went to a coffeehouse called the Newbreak Coffee & Cafe, which is right across the street from the beach and a few blocks from the Ocean Beach Pier. The pier was built in 1966 and is the longest concrete pier on the West Coast, at 1,971 feet in length.

I went to the Newbreak to do a little work on my iPad (free wifi) over a few cups of tea and a bagel. Afterwards, I took a walk on the beach and along the pier. The weather today was far from ideal, it was cold, grey and windy. Yet, the vistas up and down the coast were beautiful and striking. The sky was filled with clouds of varying hues, with streaks of sunlight punching through the clouds. See below. 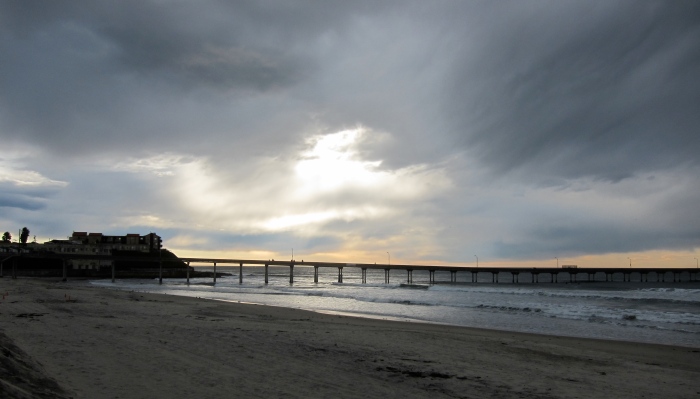 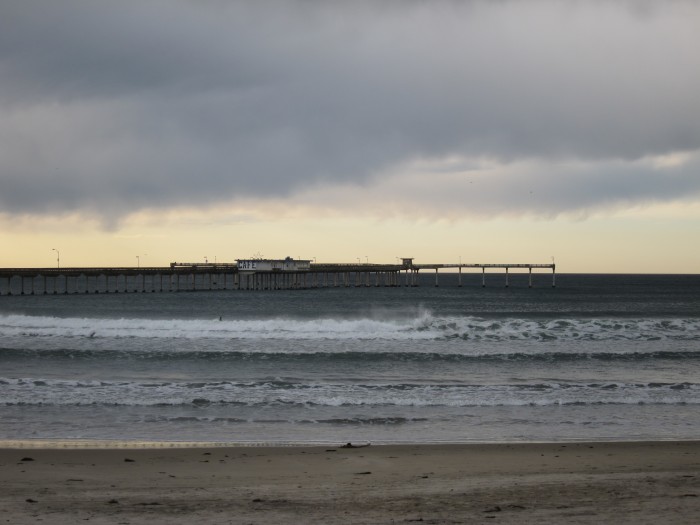