I’m sure sports fans throughout the Los Angeles area are very pleased that plans to build a new football stadium in downtown Los Angeles have finally been approved by state and city officials. Construction of the new stadium, which will be called Farmers Field, can begin when an NFL team commits to moving into the new stadium. I don’t think finding a team to play there will be too much of a challenge because the stadium will be a state of facility in a spectacular setting, located right next to the famous Staples Centre, home of the LA Lakers and LA Kings. Two NFL teams may move to Farmers Field in the end and share the stadium in the manner that the NY Giants and NY Jets share MetLife Stadium in the NJ Meadowlands. 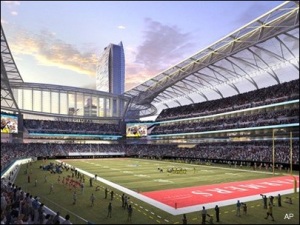 I think Los Angeles, as the nations second largest city, definitely deserves at least one NFL franchise. Of course, the big question is which NFL team(s) will move to Farmers Field. The teams that seem to be discussed most frequently are the Oakland Raiders, St. Louis Rams, Buffalo Bills, Jacksonville Jaguars and last, but not least, the San Diego Chargers.

I just hope the Chargers will not be moving to LA. I’ve become a huge fan of Chargers since I moved to S.D. back in 2003 and I would hate to see the team move because I think it has such a strong San Diego identity. Although, it is true that the Chargers were originally a Los Angeles team. They played in LA, during their first season, way back in 1961 and moved south to San Diego the following season.