There seems to be quite a bit of alarm about Apple within certain circles on Wall St. and elsewhere in the investment world because the stock (AAPL) is in the midst of significant correction for the first time in 4 years. Some people seem be questioning if the stock has peaked and others, with an even more pessimistic view, may be wondering if Apple has peaked as a company, never to be more dominant than it has been in the last few years. We won’t know the answers to those questions for some time, perhaps even a few years, but I don’t think the stock has peaked and I don’t think the company has peaked either.

As you can see from the chart below, AAPL has had quite a run from 2009 to 2012, when it soared from roughly 100 to 700, powered primarily by the success of the iPhone and the iPad.

How low will AAPL go? Well, I think it could go to the 375 to 425 range. After stocks and commodities have made extended moves in one direction they more often than not make what technical analysts call a correction and that is usually a price retracement (a move in the opposite direction) of 40 to 60 percent of the original move. It never ceases to amaze me that some people, even some seasoned professional investors, seem to expect stocks like Apple to go up and up for ever, without experiencing any real correction. What is happening to the stock now is natural. All stocks and commodities lose momentum at some point.

How long will AAPL stay down? If I knew that…well, you know how the rest goes. I don’t know exactly, but it may be a long time, even a few years before AAPL exceeds the highs in made earlier this year. However, the stock could make big moves both up and down before it stabilizes. Until the intermediate term technicals turn positive I don’t think it would be a very good idea to go long. So, I would be looking for a positive cross on the weekly MACD and the stochastics as a sign that stock ready to turn back up in a meaningful way. 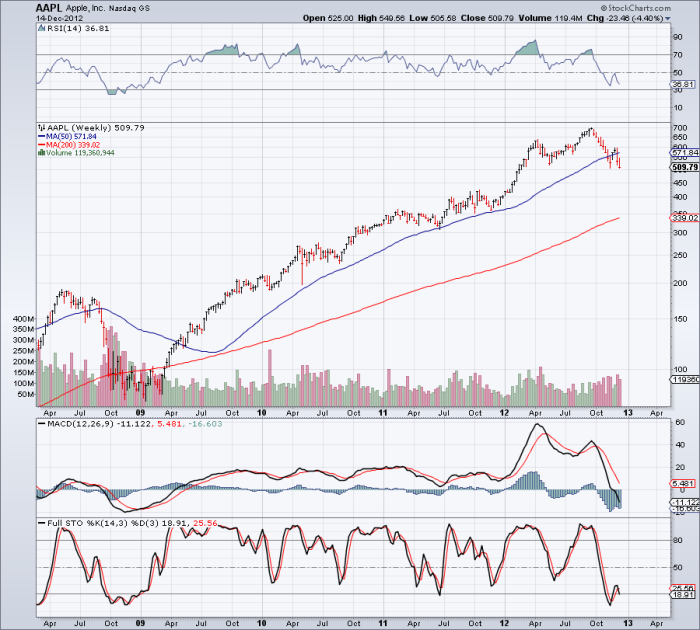 I think a major rally that does bring the stock to new highs will require a the introduction a spectacular new product that will serve as the next major catalyst for an upward movement in the stock price. That product might be the long rumored Apple TV or something else that is secret and we know little or nothing about (maybe an Apple version of Google Glass) . I think Apple remains one of the most innovative companies in the world and is very capable of delivering products that will be dominant and disruptive in the market place. CEO Tim Cook is not the dynamic leader that Steve Jobs was, but I do think Cook is a very able leader and that he recognizes that Apple must continue to innovate in order to maintain a preeminent position in technology and entertainment.